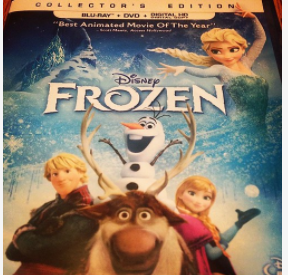 The movie Frozen is a Disney movie that came out on November 27, 2013. It was directed by Chris Buck and Jennifer Lee. The main characters in the movie are Elsa, Anna, Olaf, Christoph, and Hans. I think that the movie Frozen was an overall great movie. It provided viewers with entertainment and joy. This movie is not only great for little kids, but it is also great for older generations, because just like a lot of Disney movies they all have a lesson or theme behind the movie.

The movie is mainly about two sisters (Elsa and Anna). When their parents died, the oldest daughter (Elsa) had to become queen of Arendale. On Elsa’s coronation day, she encountered a big problem which later led to destruction throughout Arendale.

This movie is a very enjoyable movie, because not only does it have catchy songs but has a great plot. For children, it teaches them how important your sister(s) are to you. I love how they incorporated fun little creatures in it like the snowman(Olaf), the reindeer(Sphen), the trolls, and the giant snowman. So, it’s more enjoyable for younger children to watch. The characters in the movie are well made, and they really give life to the movie to make it more enjoyable.

Even though Frozen is an overall great movie, there are some things that aren’t so enjoyable. One thing includes that the songs are good and catchy, but there’s just too many songs incorporated in the movie. Another thing that isn’t so enjoyable about the movie, is that all though the plot and the main theme of the movie is great, younger children may not understand the bigger meaning behind the story. Sometimes it might be hard for younger children to understand what’s going on, because there is a lot to know and find out about the movie Frozen.

If you can’t find a movie to watch, I would recommend watching the movie, “Frozen.”  It’s a great and enjoyable movie for all ages, and every age group will have some sort of theme that they got out of it. It’s a very entertaining movie that everyone will enjoy for hours.