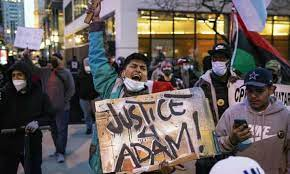 Toledo was killed in the early morning hours of March 29 after police responded to a report of gunfire on the city’s west side. Two officers in a patrol car encountered Toledo and 21-year-old Ruben Roman in an alleyway and gave chase on foot. According to footage from the officers body cam cameras reviewed by Intelligencer, one officer tackled Roman, while the other chased Toledo, who was running about a dozen feet ahead next to a wooden fence on his right.

That officer, identified as Eric Stillman, yelled “Show me your f-ing hands!” at Toledo, who then stopped, raised both of his hands above his shoulders, and turned left to face the officer. On video, Toledo and Stillman were now parallel, with the officer’s flashlight shining directly onto Toledo and his hands. In the next moment, Stillman yelled “drop it”  it is not clear if Toledo was holding an object and fired a single shot into Toledo’s upper right chest. Toledo immediately crumbled to the ground.