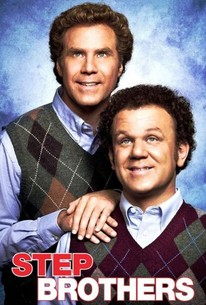 Step Brothers is my favorite movie. It is a comedy made in 2008. It stars Will Ferrell and John Reilly .In this movie it is about two 30-40 year old guys who still live with their parents and have to move in together because their parents married each other. They hate each other so they’re always fighting and they’re super childish about it.

I’d have to say it is a very good movie. It has one of my favorite actors in it (Will Ferrell) and I also like John Reilly too. I feel like it has a super strong plot line to it. It covers all the need to know information about the situation they’re in. I’d have to say it was the best comedy that came out during this time period. It draws you in and makes you laugh a lot. The movie lasts exactly 1 hour and 46 minutes.

For its time though, it has super good editing.  The edits for this make it a very good movie. I like the way the movie ended. It added a nice conclusion to it, and it just ties all the plot together. My favorite thing about this movie is the form of humor they use. It’s more of a childish like inappropriate comedy style – something like Dave Chappelle. There are some holes in the plot line that you can notice, but they’re not super important to the plot. They try to keep things consistent.

The movie never seems to have a dry moment. There is always something action or comedy based happening throughout the movie which helps keep your attention to it. They are good at that.One thing I dislike about the movie is that there’s not more scenes of them messing with each other. I think they should’ve incorporated more of that into the movie or maybe show them messing with their parents together, something like that. They also should’ve added more to the introduction. They should’ve shown some of their normal life before they escalate right into their parents getting married.

One thing I like so much about this movie is just the actors . They did very good at their lines and they don’t seem to have many mistakes when acting. All the scenes have something to do with the plot , and that helps you understand and not have to understand useless scenes. When watching this movie it give you that sense of family and disorder, and I can relate to that so much. A lot of people complain about the vulgarity of this movie but I don’t think it’s that bad .Plus if you don’t like  inappropriate humor then you shouldn’t have bought a movie classified as rated R.

The vulgarity is actually funny and it’s just not vulgarity just for the fun of it. They did make a sequel of this movie but I’ve never seen it . It’s called step sisters but I hear that movie is pretty good too. I’m not the only one who likes this movie though according to imbd “Despite a few jokes that fail to land, Step Brothers is still a ridiculously funny comedy that is gleefully stupid. Will Ferrell and John C. Reilly are perfect and has incredible chemistry.” and Rotten Tomatoes says “Step Brothers indulges in a cheerfully relentless immaturity that will quickly turn off viewers unamused by Ferrell and Reilly — and delight those who find their antics hilarious.” .